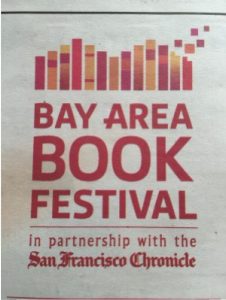 The Bay Area Book Festival, which debuted last summer, was held at various venues in downtown Berkeley, Calif., this past weekend. Eastwind Books of Berkeley had a booth in the appropriately renamed street, Radical Row, where I made an author appearance Saturday morning.

Aside from my meet-and-greet duties, my daughter, Isabella, and I wandered around the book festival, which was sprawled across different nearby closed-off streets and indoor facilities such as the Berkeley Art Museum and Pacific Film Archive, Berkeley City College and Public Library, the Brower Center, Hotel Shattuck, Journeys Stage at the Osher Studio, Magnes Museum, the Marsh Theater, and the SF Chronicle Stage at the Freight & Salvage.

At the Brower Center, I got to meet Miriam Pawel, author of the comprehensive biography of Cesar Chavez, The Crusades of Cesar Chavez, which was a finalist for last year’s National Book Critics Circle for nonfiction, California Book Award Winner for nonfiction, and the Robert F. Kennedy Human Rights Book Award. Miriam was part of a panel entitled “Right Out of California: Big Ag, Labor, and the Rise of Modern American Conservatism,” which included Kathryn Olmstead, Gabriel Thompson, and moderator Peter Richardson. 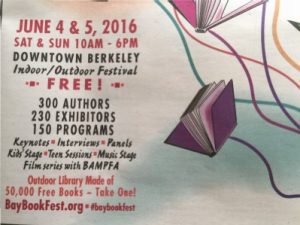 I also couldn’t resist sitting in on the session, “How Much Should a Book Cost?” at the Marsh Theater on Sunday: “The proliferation of chain bookstores in the ’90s, the dominance of Amazon, and self-publishing tools have rocked the book world and redefined readers’ expectations. An agent (Sandra Dijkstra), a publisher (Charlie Winton of Counterpoint), and a bookseller (Elaine Petrocelli of Book Passage) explain the economics that determine the price you pay for a book.”  Ethan Nosowsky, publisher with Greywolf Press, moderated.

The audience comprised mostly writers, no surprise. There were no surprises, as well, with literally how much a book costs and why. Smaller presses, no matter how critically acclaimed they are, and indie bookshops will always be facing an uphill battle with the likes of traditional publishers and Barnes & Noble and Amazon when it comes to scale and margin, respectively. Sandra Dijkstra advocated against self-publishing for serious writers, writers who are looking to produce the best book they can with a team of experts who can help the writer along his or her book’s journey.

During the Q&A, one retired librarian said that she was tired of hearing writers on the air discuss their book and then tell the audience that they can purchase said book on Amazon. Elaine Petrocelli understandably agreed with her. She suggested that writers redirect readers and audiences to indie bookstores and their small publishers and offer an incentive to purchase at these sites by autographing their books only at these venues. Yes, that’s what we do at Eastwind Books of Berkeley for my book, by the way. I steer away potential readers from Amazon, which takes a lion’s share of the prize, and whom Elaine Petrocelli vociferously noted “wants to separate you from your money” and connect the reader to a book that is worth reading. While much of what was said held no new nuggets for me, the session was entertaining and reiterated the reality of the difficult road for all the little people in the industry (writers trying to break through, small presses, indie bookstores). But it also affirmed that for those who love the written word, those who write it, read it, edit it, publish it, market and champion it, and enthusiastically review it, there still exists a solid core of people who care. Those are the ones we need to be close to and to be part of our community. And we need to support each other with our wallets.

Barbara Boxer, whose memoir The Art of Tough recently came out, served as the book festival’s keynote speaker. Also notable was Sherman Alexie, whose book Thunder Boy Jr. was being featured. I didn’t have tickets to either, but overall, it was a nice lineup. I look forward to next year’s book festival, and I’m so grateful that the Bay Area supports this literary event and is helping it to grow.